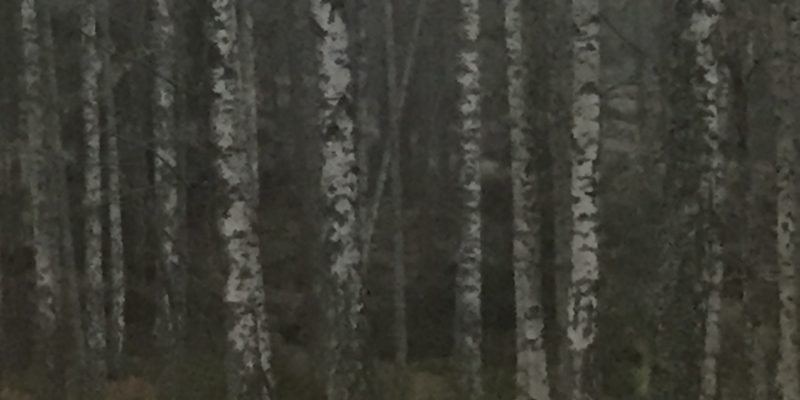 IN THE FOREST WITH PETRA LINDHOLM

When first introduced to Petra Lindholm’s work it struck a chord with me, but it wasn’t until recently that I understood why. Her landscapes are immediately undeniably poetic and aesthetically pleasing, but full appreciation of their understated sophistication and intricate detail was a process of discovery.

Recently, I found myself speeding south on a train headed for Småland. After weeks of anticipation,I would finally be spending the day with Petra. The four-hour journey to south/central Sweden culminated in Älmhult – best known as the birthplace of Ikea and I couldn’t help but ponder the paradox at hand: Why does a well traveled, accomplished, fine-artist relocate mid-career to the middle of nowhere?

Two cups of tea and a hearty bowl of rustic tomato soup later, I begin to appreciate the extent to which Petra’s career is a performance of sorts. She is not just making art, she is her art. And, her insatiable curiosity for life and unwavering commitment to a process of self-discovery takes Petra places, in mind & body. Her art is a means of documenting the journey, whether it takes her back in time to an unresolved relationship, or half way across the world, to a mountaintop.

Petra’s career began in Sweden, when she graduated from The Royal Institute of Art and earned a strong toehold in the Stockholm art world. A few years later, she left Sweden in search of her roots  – a move that took her back to her native Finland. From there, she embarked on a self-initiated research trip to Nepal, relocating her family and practice to a monastery in Katmandu. There, in the shadow of The Himalaya, she spent eight months researching mountain people, and reflecting on the symbolism of their/our upward life journeys.

Mountain existence was minimalist which led to a significant shift in Petra’s career. Lack of electricity and artist materials forced the artist out of her comfort zone (film) and into an experimental period defined by the materials that were most readily available. Film and paint were quickly replace by recycled, flat surfaces and shredded prayer flags(?). The body of work that would emerge added a new dimension to Petra’s oeuvre.

Petra’s landscapes embody a shared human experience. Evolving from her story, there is an openness to the work that invites us (the audience) in, to make the story ours. It is hard to say whether this has most to do with the artist’s choice of subject matter (often recognizable motives from nature), her arrangement of elegant forms (organic), her subtle palette (calm & non-threatening) or her intricate technique of layering (tactile, fragile & human). Even the way Petra handles her unfinished work in the studio is refreshingly open and honest – a transparency that is mirrored the works themselves.

There is a wisdom in these works, both in terms of the universally relevant themes they explore (ecology, environment, migration, relationships, cultural heritage) and in their overt invitation to appropriate them. Petra appreciates and understands the value of her audiences and creates work that connects and invites us in. They are personal and inclusive. They are Petra.

Before leaving on my train ride home, I ask Petra about her choice to move Älmhult. She smiles warmly and shrugs, as though the move just “happened”, almost by accident. Having recently relocated from central Stockholm to a small island in the archipelago myself, I can relate and anticipate that in Petra’s case, the answers will be revealed in her future artworks.